Men with prostate cancer have access to fewer specialist nurses than patients with other major cancers, statistics show.

For every urological nurse in the NHS there are 166 new prostate cancer cases a year – twice as many as the 86 cases for every breast cancer nurse, according to charity Macmillan Cancer Support.

More than 11,800 men are killed by the disease a year, while 11,400 women die of breast cancer – yet over the last 15 years prostate cancer research has received less than half as much funding. 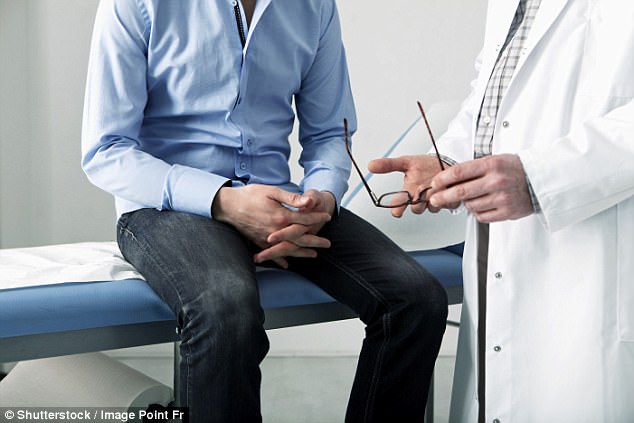 Men with prostate cancer have access to fewer specialist nurses than patients with other major cancers, statistics show

The PM’s spokesman said: ‘We absolutely welcome the Daily Mail’s campaign – it is a hugely important issue. The more we can raise awareness of this issue, and the need for men to get checked out if they have any concerns at all, the better.’

Others also deal with kidney, bladder and testicular cancer. Prostate cancer nurses have the most patients of 11 major cancer types, with 166 new cases per specialist, compared with 127 for lung cancer, 110 for sarcoma, 96 for bowel cancer and 86 for breast cancer. Heather Blake, of Prostate Cancer UK, said: ‘Prostate cancer is on track to become the most common cancer overall by 2030 with over 330,000 men currently living with the disease in the UK. We know that men with prostate cancer have better outcomes if they are assigned a specialist nurse.

I hadn’t even realised I was at risk 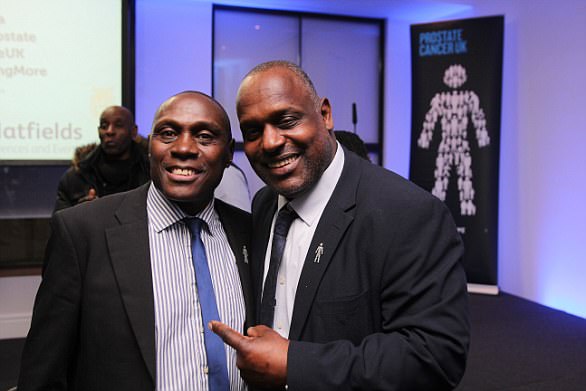 Fitness fanatic Thomas Kagezi had put his excessive need to use the toilet down to the fact that he drank a lot of water for his training.

But prostate cancer survivor Errol McKellar gave him a leaflet at a train station, and urged him to go for an examination. So the father-of-two decided to get tested.

The civil engineer, 57, said: ‘I had never thought about myself being a risk, but the fact was I was a black man in my fifties and at a high risk of getting the cancer. Plus I saw the urinating was actually a symptom.

‘I didn’t want to at first, but I thought I had better get tested.’

He was diagnosed in October 2016 and, after five weeks of radiotherapy, he was given the all-clear.

Mr McKellar, 60, gave a discount to customers at his garage in Hackney, East London, if they got tested – helping 48 men get diagnosed. He said men were too embarrassed, adding: ‘It’s mad and it needs to change.’

‘And the situation is set to get worse. With large numbers of the current workforce fast approaching retirement and far fewer nurses choosing urology as a specialism, the workforce simply isn’t being replenished at a time when we need it most.’

She said in some areas only half of men have access to a specialist nurse, who often act as the main point of contact for patients.

Karen Roberts, of Macmillan Cancer Support, said: ‘Prostate cancer patients often need really specific support dealing with the physical and emotional impact of the disease. While levels of need vary between cancer types, it is clear this is an area of specialist cancer care that is in desperate need of attention.’

Wendy Preston, of the Royal College of Nursing, said: ‘What is most worrying is that nurses generally only become specialists in fields like cancer once they’ve had many years of experience – but with one in three nurses set to retire in the next ten years, these shortages of specialists seem likely to get worse, not better.’ Cancer minister Steve Brine said the Government planned for every patient to have access to a cancer nurse specialist or support worker by 2021.

Men are more likely to get cancer than women because their immune system declines faster, research suggests. A study led by Dundee University, published in the journal Proceedings of the National Academy of Sciences, said men’s 14 per cent higher chance of cancer could be explained by poorer quality T-cells, which hunt down the disease.